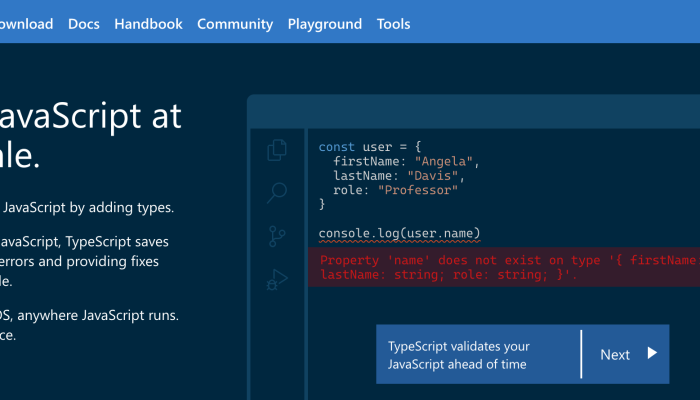 TypeScript 4.0 just came out, and people probably want to be upgrading to it soon. Here's a quick summary of what's new based on official release notes. This is only meant to be a quick summary, so I have left out edge cases and detailed examples. If you have time, I'd recommended giving the official release note a proper read. But for those who want to get a high-level gist of what changed, this might be useful.

Of course, all credits goes to TypeScript team.

It is now possible to assign better types to tuples, which validates lengths of the input and the order of the elements.

In order to improve readability, it is now possible to provide labels to tuples types.

This could be useful when using tuple in the following situation. In earlier versions, there are no parameter names which can make the code harder to understand.

TypeScript 4.0 now uses control flow analysis to determine the types of properties in classes when noImplicitAny is enabled.

In the following example, TypeScript can work out the type of area based on the assigned type of sideLength and the fact sideLength was used to calculate area.

Compound assignment operators apply an operator to two arguments and then assign the result to the left side. This is very commonly used in JavaScript and other languages.

Probably don't need to worry too much about this for now. Just know that there might be more changes coming later which will build on top of this.

In Typescript 4.0, it is now possible to customise the fragment factory through the new jsxFragmentFactory option in tsconfig.json to apply this change globally.

Alternatively, it is possible to only apply to single files using the new /** @jsxFrag */ pragma comment.

It is now also possible to use --incremental with --noEmit options and still take advantage of the faster build.

I won't go through them too much here, as they are not likely to affect most people. Here are one sentence explanations:

Our lib.d.ts declarations have changed – most specifically, types for the DOM have changed.

Properties Overriding Accessors (and vice versa) is an Error

TypeScript now always issues an error when declaring a property in a derived class that would override a getter or setter in the base class.

Operands for delete must be optional